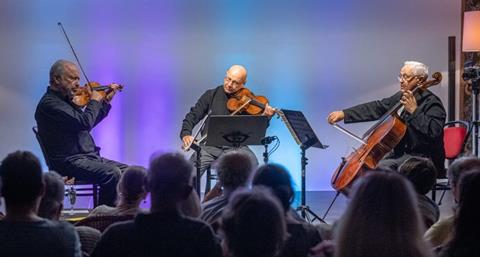 Sitkovetsky’s transcription was made almost 40 years ago, but he has kept revisiting and revising it over two recordings and countless concert performances. Having played the piece myself, at the concert under review I noticed several small differences from the printed parts. Afterwards, Sitkovetsky told me that he still considers his arrangement a work in progress! The violinist played Bach’s intricate embellishments with the greatest spontaneity and agogic freedom, leading on his colleagues unwaveringly and by the slightest means – sometimes a raised eyebrow was all that was needed.

Spiccato was unanimously employed in ever-changing degrees of sharpness – a reminder that the transcription was inspired by Glenn Gould’s playing. As melodic lines passed seamlessly from one instrument to the next, the individual timbres of Sitkovetsky’s Strad, Gridchuk’s Testore and Geringas’s Guadagnini came to the fore. The hour-long concert seemed to be over in no time; of course, there were no encores, but I for one wouldn’t have minded if they had started all over again!

We inform you that this site uses own, technical and third parties cookies to make sure our web page is user-friendly and to guarantee a high functionality of the webpage. By continuing to browse this website, you declare to accept the use of cookies.